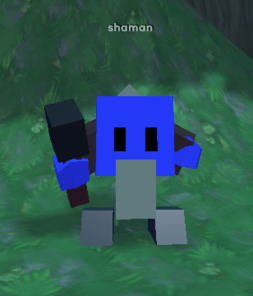 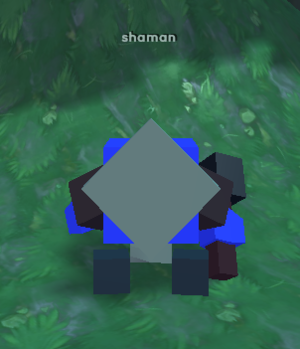 Shaman is one of the four playable classes in Hordes.io!

The Shaman's role is to support the group by healing the Tank and offering offensive Buffs or crippling Debuffs.

Effect: Curse your enemy with a spell of decay, dealing initial damage and additional damage over time.

Effect: Heal a friendly target over a short duration, stacking up to 3 times while also increasing the power of your Mend.

Effect: Summon your party members, allowing them to instantly teleport towards you.

Effect: You and your party members generate extra mana passively.

Effect: Heal a friendly target. Amount is increased for each stack of Revitalize.

Effect: Turn into your spirit animal for additional movement speed, removing all movement impairing effects active at the point of the transformation. All spell casting will cancel this effect.

Effect: You and your entire party enrages with haste, causing you to attack faster.

Effect: Turns your target into a zombie, interrupting all spellcasting and slowing movement for the duration.

Effect: Place a totem on the ground healing your entire party.

Shamans are best at grinding experience when with a party but when solo the best way to grind is to cast decay over multiple enemies and kite them in a circle, as long as you don't fight ranged enemies, you can farm experience without taking damage thanks to the slow from decay.