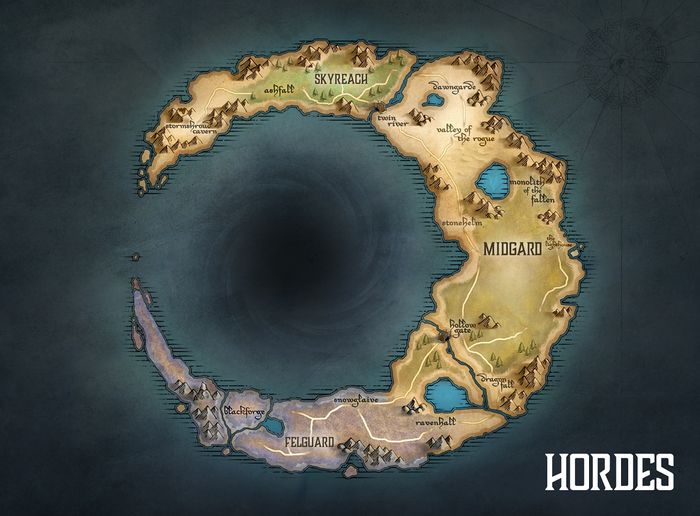 This is a new map coming to Hordes.io soon, with a little tale for you!

Midgard is a neutral city where some may grow rich and prosper while others suffer and fall. For those of no alignment, the kingdom seems to be a focal point for the ongoing war between the Vanguard and the Bloodlust. The never ending sound of shields slamming and cannons firing plagues the castle’s walls both day and night. It was rumored the kingdom was built thousands of years ago by a race of giants, and thus making it the most fortified castles ever built.

After decades of war, King Oren built a Great Wall that stretched from the western bay to the eastern seaboard. Before dying, he decreed both factions stay in their own lands. To ensure this divide, he used magic to summon what is known as The Dregnr, an immortal knighthood that protect and defend the kingdom with magic and artillery.

What King Oren did not predict was that magic would be learned by the heroes of the realm, and would grow powerful enough to not only defeat the Dregnr, but to control them.

Today, the two factions are again in a never-ending war to claim Midgard’s throne and the empire that comes with it.

When the people rebelled against the Vanguard, they found refuge on the southern continent which was known for its harsh winters and climate. The Seven – with the help of Kaerbi – began to build one of the most intricate and war-fueled kingdoms ever seen. It was built knowing that the Vanguard would soon come to attempt to destroy their rebellion but with the brilliant mind of Kaerbi on their side, they created a city that is believed to be impenetrable.

Made with red stone and black metal, the Temple is a very dastardly looking place. Everything appears to be sharp as a blade – even the castle’s roof. Seven towers emerge in the back of the city from the ground level and disappear into the sky.

By creating the Felguard Kingdom they would start the greatest war in history. They were the Bloodlust.

The Vanguard reside in Skyreach. It was at one point known as the Second City, because in its creation, only Midgard existed. Built brick by brick by the original Vanguard founders who were expanding King Oren’s territorial reach.

This city was built high along the mountain ranges to provide an advantageous position from their attackers. Its gray stone walls appear to be carved out of the mountain itself. It’s also a very wealthy city – as the kingdom is covered in precious metal trim that is elaborately etched with ornate designs and symbolism.

A once vibrant and lush beach filled with exotic vegetation and wildlife is now plagued with disease and deformed creatures. It’s rumored that many centuries ago an otherworldly vessel crash landed on the shores of Snowglaive and spread a contagious virus that swept the lands by storm. Water freezes into a toxic ice as the rain transforms into ash as it falls. The wildlife was soon afflicted by this virus and in time mutated into strange beasts that appear to be deathly ill and hostile to anything that moves. Only the most grotesque of creatures inhabit this province.

Ravenhall marks the only province on the southern continent that hasn’t been fully tarnished by the Maelstrom. The lake is most famous for its ongoing battles between the outcasts of Red Keep and the lords of Dragonfall. Scattered among the province is destroyed artillery from historic battles, thousands of skeletons grout walls of mud and stone, and the spirits of slain soldiers who know not that they’re dead.

Dragonfall is the Bloodlust’s first defensive line against Vanguard. By being so, it is almost always in a state of turmoil – a place where everyday a new siege attempts to bring down its fortification. Nevertheless, the Felguard have protected this province from ever falling. Soon enough this province will once again blossom to become a place of trade, wealth, and prosperity.

Named after the legendary blacksmith Kaerbi, this bridge is the sole means to cross the violent river between Felguard territory and Midgard. It was built by Kaerbi himself along with his son – a carpenter – by the name of Durnik. Made of adamantium steel and elder wood, it is one of the most durable structures in the entire realm. Be warned though, many thieves and murderers hide in and around this bridge preying on the helpless and bountiful – forcing their toll to cross the Hollow Gate.

Stonehelm is a fisherman’s paradise and is the number one source for fish and trade by sea. Dozens of ships are docked along the coastline and pier from the constant coming and going of fisherman seeking fortune. Due to this economic hot spot, it’s not uncommon for bands of pirates to be roaming the coast waiting for a fresh shipment of goods to arrive.

Dawngarde was once a place of beautiful scenery and exotic wildlife, but has since turned into muck from the constant battles between the Vanguard and the Bloodlust. Many of the followers of the Seven try to occupy this land as it is said to contain one of the rarest types of trees in the world: The Deadwood. While most believe the story of Deadwood to be a tale for children, the Seven believe that Deadwood will one day return and grant one of its limbs to a worthy hero. It is for this reason the Felguard struggle so eagerly to claim these lands.

After Kaerbi built his bridge on the southern provinces, a thief known as Vincent came across the schematics whilst robbing Kaerbi’s smithy in Blackforge. Instead of selling the design to a carpenter, he went and tricked a group of tradesmen into the building the bridge for him. Identical to Hollow Gate, it was easily gathered that Vincent had stolen the design and he was banished from the mainland. To this day, you may see a hooded figure hiding in the shadows of the Twin River – waiting for his next chance to steal his way to fame.

Ashfall has risen from an unpopulated forest to a growing community of lumberjacks and fortune seekers. It has the rarest of vegetation which supply tradesmen with the best materials for their craft. On any given day, the spirits are high within the boundaries of Ashfall. Patrons of the Vanguard gamble their wealth away during the day and drink ales until dawn. Every now and then, a lumberjack might strike it rich and find himself an Elder Treant – which would secure enough wealth to last a life time.

Valley of the Rogue[edit | edit source]

While most of the northern lands are filled with beauty and riches, the Valley of the Rogue is a harsh and barren place. Not many things could survive in a place like this, which explains the mountainous bones of all types of creatures breaching out of the sand dunes like thorns on a rose stem. It was named so after a group of mercenaries who abandoned the Vanguard and began to slay all living creatures who venture into their wasteland. Before long, the band of rogues became that of legend. It became so dangerous to travel through the valley that trade routes were deterred and the people of Midgard were forbidden to enter the area. Though, this law failed to deter the adventurous heroes seeking fame and fortune in hopes of bringing back the head of a Rogue.

Monolith of the Fallen[edit | edit source]

Before the time of our people, an ancient race visited this world and left behind a series of strange rocks known as monoliths - or so they say. They are so enormously tall, you cannot see the ends of their jagged boundaries as they reach up into the heavens. Most have undecipherable symbols and messages riddled up and down their base – pulsing a faint glow. In time, researchers found similarities of these etchings to the same etchings that can be found inside the Nether. For years, we have thought of these monoliths as messages from the Seven but now we know they serve a far more sinister function.

The Red Keep… Home only to the outcasts, deranged murderers, thieves, and all else that is wrong with the realm. Its walls stained with the blood of a thousand innocents and lands destroyed by the Maelstrom. The Red Keep has been the sanctuary of evil since the dawn of time and only the most malicious of beings reside there. It’s location is not fully known, since no cartographer has left the Red Keep with their life. It is guarded by unworldly beings said to be from the Nether itself, but rumors aside – there is little we truly know about Red Keep other than a renowned criminal known as Skaer claims a kingship over this red wasteland.

Built by the famous architect Deksus, the Lighthouse is a staggeringly tall structure that guides ships during the blackest hours of night. Its light is so incredible, it can be seen from almost anywhere in the world. The Lighthouse itself is connected to the mainland only by a bridge that looks as though it could collapse at any moment. It’s rumored that every so often, a colossus sea creature slumbers under the bridge during dawn – many have said they can hear echoes of the cliff walls grumbling and growling. The strangest thing about the lighthouse is that after 100 meters off the coast, the sea is devoured by a fog so thick and dark, it's like staring into an empty void.

In more recent years, the Lighthouse has become a strategic holding point for the war between the Vanguard and the Bloodlust. Due to its location, it provides one of the quickest routes into the eastern entrance of Midgard, making flanking missions a common battle strategy.

For centuries, the Stormshroud Caverns have been a place of worship and sanctuary for the Vanguard. It was believed to be the birthplace of the Seven. In attempt to weaken the faith of the Vanguard, the Bloodlust's necromancers would cross the Empty Sea by ferry to summon bizarre manifestations that raid the Skyreach lands. Even with all the murdering of innocent Vanguards and vandalism within the cavern walls, their gods did not appear. Still, the Vanguard believe a day of reckoning will come to those who don't fear the Seven. Until then, heroes venture into the depths of the cave, to clear it of its sin.

An ancient ruin said to be home of the famous blacksmith Kaerbi – the one who first welded the might of a sword to the magic of the Nether. Since those days have passed, the place has become overrun with foul beasts and searing lavas. An enormous golem made from rock sleeps in front of cave where Kaerbi and his fellowship are presumed to be hiding.

Rumors aside, the Seven treasure this historic region and have been fortifying the province for centuries. Today, heroes sometimes venture into this hell in search of fame and fortune to no avail.

Dek has the current release date though private from the public. Some time soon though!